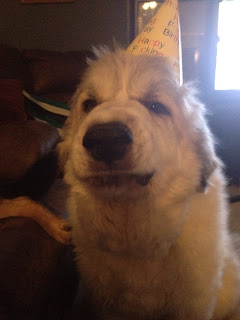 In case you were wondering, Thor wouldn’t allow me to put the “Happy Fucking Birthday” hat on him. Apparently he has more pride than Chewy, who allowed it but only with a cranky face. ﻿This is not the same cranky face I get when it’s time for nail clipping, ear cleaning, or bathing…but it’s close.
The other night my fool furbabies were lying on opposite sides of the living room. Husband was gaming in his reclining chair with Chewy chilling under the footrest (so he couldn’t close the chair and get up, of course) while I lazed about on the couch with Thor and caught up on Lost Girl (If you haven’t seen this show yet, WATCH IT. It’s funny and sexy…hello…main character is a Succubus…and all manner of awesomesauce).
I dont’ know what the hell was in the air, but much like brothers my two dogs occasionally pull the “I’M NOT TOUCHING YOU” shit with each other. Only with teeth. Chewy, our mild-mannered stuffed-animal-serial-eviscerator started it.

Chewy leaves bodies on the floor. 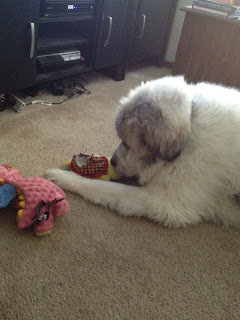 And steals Thor’s toys (in this case that used to be a turtle, but the shell is ripped open and he’s mid-evisceration). 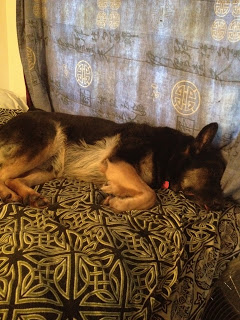 Usually Thor doesn’t care (note his tongue sticking out).
However, when he DOES care he reminds us all that German Shepherds have…very scary teeth. I’ve never been able to catch a good pic of Thor’s teeth, but if you’ve seen ANY cop show with K-9 officers, you know what I mean. His lips curl up and he growls deep in his chest.
And Chewy stares back at him from across the room, growling. Occasionally they get up and have a scuffle (which can move furniture, since they’re 100 and 145lbs). It should be noted that CHEWY ALWAYS LOSES, yet he usually starts the trouble. Sigh. When I get home from work and Chewy has a new scab on his head I know they got into it (again) and Thor (again) held Chewy’s head in his mouth like “Dude, I could bite your face off, so leave me alone. Go find a toy to rip apart. I’m fucking sleeping!”
On Wednesday they were both too lazy to actually do anything except stare and smart off at each other.  So for two full hours Lost Girl had this really fucked up growling-dog undertone to the soundtrack. Later that night they cuddled on the guest bed together, so apparently the argument was over.
At least I haven’t had to yell “THOR! STOP HUMPING YOUR BROTHER!” for a few weeks.

I'm a history and mythology fanatic with a head full of "but what if it happened THIS way instead" moments. I find humor in the most inappropriate situations. View all posts by Jess

One thought on “My Dogs: Too Lazy To Rip Each Other’s Faces Off.”

This site uses Akismet to reduce spam. Learn how your comment data is processed.

The Middle Ages in the Modern World

FOR WOMEN WHO LOVE HORSES, TRAVEL AND ADVENTURE

Life should taste as good as books